Ah, those Californians—a bunch of grown-up hippies single-handedly keeping medical marijuana in the national consciousness. But wait. My wife and most of her family are from California, and they all seem surprisingly normal. Maybe medical marijuana is worth a careful Biblical look. Scripture raises important questions. 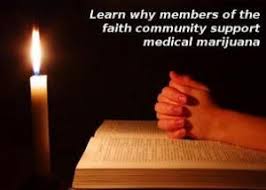 First, is it moral? This is the most important question. Does Scripture prohibit or command using marijuana for medical purposes? If something is illegal, unless Scripture commands us to do it, we do not. Where medical marijuana is legal, this is no longer an issue.
Second, are mind-altering drugs sinful? This one is a bit more slippery. Many prescription drugs—like psychiatric drugs—can be mind-altering, and so are legal drugs such as tobacco and alcohol. Christians have reasonable arguments on both sides. But I think we can agree that one's motivation is relevant. If someone puts their hope in mind-altering drugs, and these drugs become a way to turn away from the Lord, they are idolatrous and wrong. Even then, that does not mean that the person must stop taking the drugs. It means they must learn how to turn to the Lord in their troubles.
Third, is it wise to smoke medical marijuana? This overlaps with the morality question. There are times when something is morally permissible, yet unwise. If you struggle with a desire for alcohol, it is permissible but unwise to work in a place where alcohol is served. With medical marijuana, that question could be reframed as, "Is it helpful or dangerous?" Are there deleterious consequences to this treatment? The brief answer, and I suspect there would be many heads nodding at this, is that every medical treatment has possible harmful side effects. In an era of full disclosure, many prescription warnings end, "Oh, and you might die too." When you line up modern pain relievers, marijuana looks quite tame. It is riskier than Tylenol but safer than Vicodin. The dangers ebb when the marijuana user is terminally ill, and Scripture supports palliative care for the dying (Prov. 31:6-7).
Finally, is your conscience clear? Is it okay that people know you are taking medical marijuana? You do not have to announce it in front of the assembly, but you should not be ashamed if other people know. If your conscience bothers you, do not do it. For some people, the stumbling block might be that you smoke it. Put it in a pill form and use its technical name, and many consciences would probably be soothed.
Many innovations have unwanted side effects. For example, the Internet is a purveyor of pornography. Yes, more people will use marijuana for non-medical reasons. People who would not cross the barrier between legal and illegal might be more prone to try something that is legal though restricted.
How would I vote? Be wise and do not violate your conscience.
-Ed Welch is a counselor with the Christian Counseling and Educational Foundation and author of several books on addiction and mental illness
Note from the Cannaculturist:  Please leave a comment on your take of this article... Do Christians have an obligation to truth in regards to cannabis?  Does our modern society's understanding of cannabis (or lack of) play a factor in how a Christian handles the issue? What are your thoughts?
Posted by Cannaculturist at 6:55 AM